The Ebola crisis: Much worse to come

The Ebola epidemic in west Africa poses a catastrophic threat to the region, and could yet spread further

From The Economist: The Ebola Crisis: Much worse to come 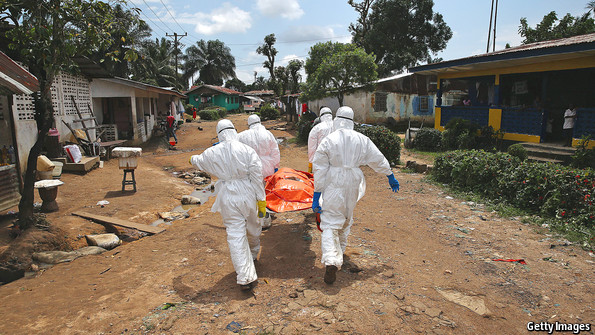 ON MARCH 25th the World Health Organisation (WHO) reported a rash of cases of Ebola in Guinea, the first such ever seen in west Africa. As of then there had been 86 suspected cases, and there were reports of suspected cases in the neighbouring countries of Sierra Leone and Liberia as well. The death toll was 60.

On October 15th the WHO released its latest update. The outbreak has now seen 8,997 confirmed, probable and suspected cases of Ebola. All but 24 of those have been in Guinea (16% of the total), Sierra Leone (36%) and Liberia (47%). The current death toll is 4,493. These numbers are underestimates; many cases, in some places probably most, go unreported.

Patco Arts/Patco Arts Blog/WP Blog It All....sit back - relax and enjoy it all. Thanks for the visit!
View all posts by Bob →
This entry was posted in Fun of it all!. Bookmark the permalink.